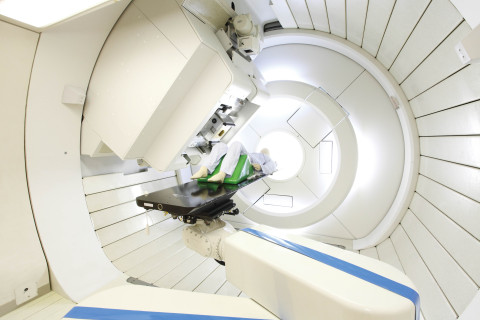 In the United States, approximately 42,000 benign and malignant primary central nervous system (CNS) tumors were diagnosed in 2007, with approximately 3300 of these diagnosed in patients younger than 20 years of age. The treatment of these tumors with ionizing radiation is performed in definitive, post-operative and palliative clinical settings. Unfortunately, the radiotherapy dose necessary to achieve long term local control of CNS tumors often exceeds the tolerance doses of critical structures, including the spinal cord, brain stem, optic nerves, pituitary gland, vertebral bodies and eyes. As a result, difficult clinical choices must be made between risking damage to
these structures and failing to deliver sufficient radiotherapy doses to attain local control of the tumor. Even while maintaining dose constraints to critical structures, CNS radiotherapy can lead to undesirable neurocognitive deficits that may be either temporary or permanent in adults and are often permanent in children. Therefore, any advance in dose conformity to the target volume and avoidance of critical structures either with IMRT (photons) or PBT is welcomed.
Future Prediction Based on Technology Development
Technological development in CNS PBT is currently focused in two broad areas. The first area of major innovation concerns tumor localization and patient immobilization. New techniques developed for photon-based image guided therapy are quickly being adapted for use at major PBT centers. The other major area of innovation is in the delivery of PBT itself. Currently, most PBT centers use passively scattered proton beams to treat CNS patients. However, in the near future, these centers will also have the ability to use energy-modulated, intensity-varying proton beams with scanning techniques and inverse planning optimization methods. However, at this time there are limited data on the scanning technique.

Evaluation/Summary of Results of Existing Studies
Planning studies comparing conformal photon and PBT CNS radiotherapy techniques have found, in general, that the coverage of the PTV is either similar or slightly better with PBT and that the avoidance of critical structures and the total integral dose were substantially improved with PBT.One site where PBT has been extensively used is chordomas. Patients with partially resected base of skull or cervical spine chordomas and chondrosarcomas who were treated at Massachusetts General Hospital (MGH) with combined photons and PBT showed a 5-year actuarial local control of 82 percent and disease-free survival of 78 percent. In a series of postoperative PBT for pediatric base of skull chordomas and chondrosarcomas, 5-year progression free survival was 100 percent and 77 percent for chondrosarcomas and chordomas, respectively. Other centers using either combinations of photons with PBT or PBT alone have found similar results and attributed the success of this therapy to the increased ability to safely deliver higher doses of radiotherapy using PBT techniques as compared to photons. Of note, these results are often compared to conformal photon radiotherapy, and results in some series for stereotactic radiosurgery compare more favorably with PBT results. Overall, there are limited data on the toxicity of these PBT-based chordoma treatment regimens, and it is difficult to make meaningful comparisons among the toxicity results of the available small trials of protons, protons/photons, or photons.
Only two published series address the treatment of malignant brain tumors in adults using PBT. In one series of 20 patients, patients with grade 2 and 3 gliomas were treated post-operatively to 68.2 cobalt gray equivalent (CGE) and 79.7 CGE, respectively, and the long term local control and survival rates were not found to be greater than historical controls treated with photons alone. In another series of 23 patients, patients with grade 4 astrocytomas (glioblastoma) treated following resection with 90 CGE using PBT and photons were found to have a median survival of 20 months, which is greater than expected for photon radiotherapy alone . Treatment failures predominantly occurred in the areas that received 60-70 CGE, but the authors thought that extending the 90 CGE coverage to these areas would have led to unacceptable toxicity levels. In a trial of combined photon and PBT for atypical or malignant meningiomas after surgical resection, Boskos and colleagues recently reported a local control, 2-year overall survival, and 5-year overall survival of 61.3 percent, 95.5 percent, and 53.2 percent, respectively. Thus, while PBT may allow for dose escalation with sparing of normal tissues, there is certainly a limit to the clinical benefit attainable by this approach. Finally, the treatment of olfactory neuroblastomas with PBT has recently been reported, and in this series, high dose PBT (65 CGE in 2.5 CGE fractions) was delivered and resulted in 84 percent progression free survival at five years without any grade 3 or greater acute or late toxicities.
Due to the increased ability of PBT to spare normal CNS tissues, there has long been a strong interest in using PBT to treat benign brain tumors. An early study of PBT for secreting pituitary macroadenomas showed similar rates of hormone normalization with higher rates of pituitary deficiency and oculomotor deficits in patients receiving PBT. However, more recent series have found high rates of improvement in presenting symptoms, hormone secretion, and resolution of mass effects, with the majority of patients having no new visual field or hormone deficits. In other series using PBT to treat meningiomas, 91.7-100 percent local control was achieved at three years with rates of grade 3 or greater toxicity of 0-12.5 percent.
Summary
In the treatment of skull base and cervical spine chordomas and chondrosarcomas, the use of conformal photon based radiotherapy leads to decreased local control and increased disease progression. However, most photon-based treatments have used lower doses than similar attempts with PBT. In contrast, stereotactic photon radiosurgery series have achieved more comparable results to PBT; therefore, the absolute clinical benefit for PBT is less clear for lesions in which the dosimetry of photon radiosurgery provides for adequate sparing of normal tissues. In patients with glioblastoma, one trial of combined photon/proton radiotherapy yielded improvement in local control as compared to trials of conformal or stereotactic radiotherapy alone, although high dose PBT has yet to be combined with temozolomide. For the majority of CNS malignancies, however, the potential benefit of using PBT remains theoretical and deserving of further study.
PBT has multiple theoretical advantages over photon radiotherapy for CNS tumors due to the ability of PBT to deliver high dose radiotherapy with steeper dose gradients to proximal critical structures than can be achieved with photon radiotherapy. Clinical data from PBT or mixed photon/PBT for base of skull tumors appear superior to previously published series of conformal photon radiotherapy; however, stereotactic photon radiosurgery may provide a significant dosimetric and clinical advantage to standard conformal (3D or IMRT) radiotherapy techniques. Overall, more clinical data are needed to fully establish the role of PBT in CNS tumors.

Source: with courtesy of the ASTRO from the ASTRO report : „An Evaluation of Proton Beam Therapy“